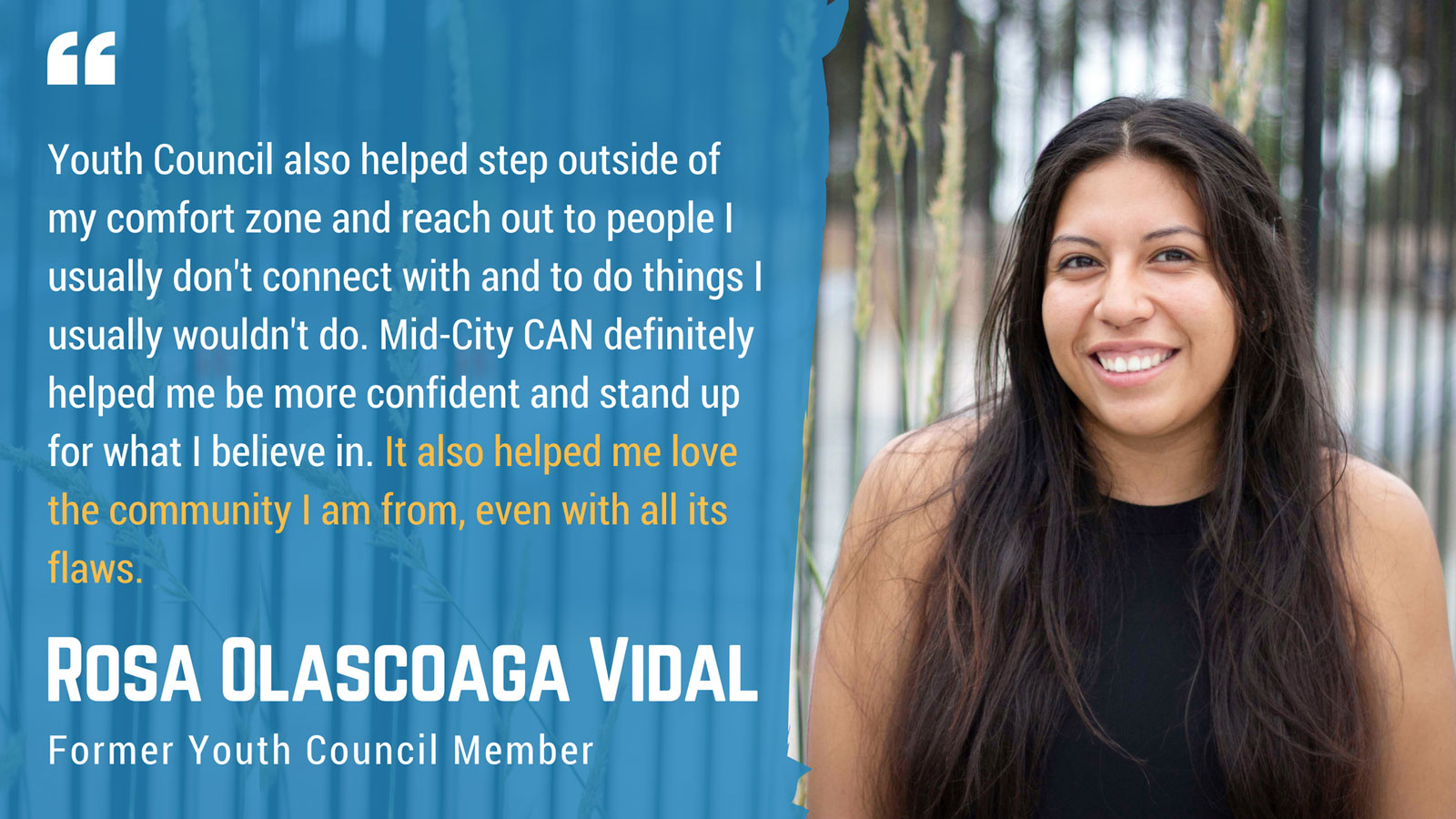 Check out Rosa's story below:

"I joined Youth Council about ten years ago, when I was 12. I got to work on starting the Youth Council and the direction it would take. We visited different youth centers throughout California since we wanted to bring one to city heights. That was my first time travelling through California at a young age and we explored different neighborhoods where we saw a lot of community involvement from the youth.

We first did a graffiti paint-out with community event and a grant from The California Endowment; I designed the flyers and it was a big event for me at that time. We partnered with different organizations that do cleanups and went around cleaning up City Heights.

Before organizing for the skatepark, we did a lot of training around advocacy tactics and youth-adult partnerships with Mark and other adults at Mid-City CAN. We learned how to run our own campaign. Mark guided us throughout the process and connected us with other community leaders that were interested in the skatepark idea. We had meetings with them, which were at first very intimidating since we were all very shy. At first it felt like an adult conversation and we were seen as just kids. But then we developed more confidence and we knew exactly what we wanted and it was easier to ask adults if they were with us or not.

That's how we built our network, by getting out the word that we needed a skatepark and people would either support us or were against us. We had community meetings where we would talk about thinwhere the park would be and we started working with the city. At that point Marty Emerald and Todd Gloria were the first to support us, but even then, I had trust issues because we didn't have anything in writing. So we created pledge cards for our local leaders to commit to supporting the skatepark. We would go to city council meetings, which were intimidating and we were told that even though the skatepark was important, City Heights had greater needs. We were treated as kids that didn't know what we were talking about. Fortunately by this point we already had many adults on our side who defended us on the long run.

We secured funding from the Tony Hawk foundation through Mid-City CAN and then everybody was onboard because we had the money. We also had many community events like a temporary skate park at the parking lot, which was a strategy to get people excited about the idea. Even youth who were not involved in Mid-City CAN but just wanted a skatepark would come to the weekly meetings to talk about the skatepark. We would walk around City Heights and mobilized people to come out. Angeli and I would just call everyone we knew to bring them into the campaign.

At Youth Council I learned how to debate better and defend my ideas, I learned how to organize my thoughts and manage my time because we had deadlines and meetings to plan for. I learned how to talk to different people who don’t agree with me and I am better at finding common ground, which definitely helped me in college. Youth Council also helped step outside of my comfort zone and reach out to people I usually don't connect with and to do things I usually wouldn't do. Mid-City CAN definitely helped me be more confident and stand up for what I believe in. It also helped me love the community I am from, even with all its flaws.

Youth Council helped me understand that we could do something even though we were a little community and little tiny people, we are powerful and gave me the confidence to know that if we can change our community, we could change the world.

I love City Heights and that's why I was so involved, because I saw so much potential in our community. Attending school outside of City Heights I saw other communities with no liquor stores and beautiful parks that weren't invaded by gang members. I would come home and we weren't allowed to go to the park because it wasn't safe. So the work that we did here made me think that one day we would be able to go to the park and feel safe and things wouldn't be broken and the street lights would be on. I knew that City Heights is beautiful and could be a better place but people don't see it yet and that's why I dedicated so much time to Youth Council. I would go to school because I had to but after that I would come straight to Mid-City CAN and I would spend most of my time here, Monday through Friday.

I was just so confident in the beauty of this community and everything it has to offer.

In my dream vision of City Heights we will have a youth center that is run by youth. One day residents will invest in their own community and be able to buy their own houses here, not having developers come and buy property. All the youth involved in Mid-City CAN will come back and buy a home here that would stay within our families and generations. City Heights would be for the people that belong here, that work here, and have always lived here and youth will know that they can contribute so much to the community and to themselves. Getting involved is an investment in yourself because you learn about different people and our community because where we're from is who we are at the end of the day."