MID-CITY COMMUNITY ADVOCACY NETWORK CHOSEN AS NONPROFIT OF THE YEAR

Mid-City Community Advocacy Network is proud to announce it has been selected as a 2019 California Nonprofit of the Year by Assemblywoman Lorena Gonzalez-Fletcher.

The Mid-City Community Advocacy Network's mission is to create a safe, productive, and healthy community through collaboration, advocacy, and organizing. With the help of its residents and partners, they are able to drive positive change across many systems and issues that concern and affect the residents of City Heights.

“We are honored to be recognized by Assemblywoman Gonzalez Fletcher as Nonprofit of the Year. This award is especially meaningful to Mid-City CAN this year as we are celebrating 30 years of working hand-in-hand with our community to create a thriving City Heights. This is really a recognition of the collective dedication and the love that youth, parents, teachers, and partners have for this community,” commented Diana Rodriguez Ross.

Support community power and the prospect of a happier, healthier future for ALL by making a small contribution today!

“Nonprofits are often hidden in plain sight,” explains Jan Masaoka, CEO of the California Association of Nonprofits (CalNonprofits). “California Nonprofits Day is an opportunity for our elected officials to celebrate the good work they see nonprofits doing in their districts, and for everyone to appreciate the collective impact of nonprofits in our communities.”

California Nonprofits Day, now in its fourth year, was formally recognized by Assembly Concurrent Resolution 62, authored by the chair of the Assembly Select Committee on the Nonprofit Sector, Assemblywoman Monique Limón (Santa Barbara), who will speak at the celebration luncheon. Senator Holly Mitchell will keynote the luncheon. The day is organized by Assemblymember Limón and CalNonprofits.

According to “Causes Count,” a 2016 report commissioned by CalNonprofits, the nonprofit sector is the 4th largest industry in the state, employing nearly one million people. Each year, California nonprofits generate over $200 billion in revenue and bring in $40 billion in revenue from outside of California. The unpaid labor contributed by volunteers at nonprofits is equivalent to 450,000 full-time jobs every year.

This includes everything from homeless shelters and fundraising foundations to trade associations and advocacy groups that promote causes such as increased transit options or environmental protection.

That represents the number of human services public charities in San Diego. This is the largest charitable category in the region. These groups provide services to specific communities such as children, seniors and the homeless. Human services charities include Boys & Girls Clubs, Meals-on-Wheels and Mama’s Kitchen, which delivers meals to homebound San Diegans with AIDS or cancer. 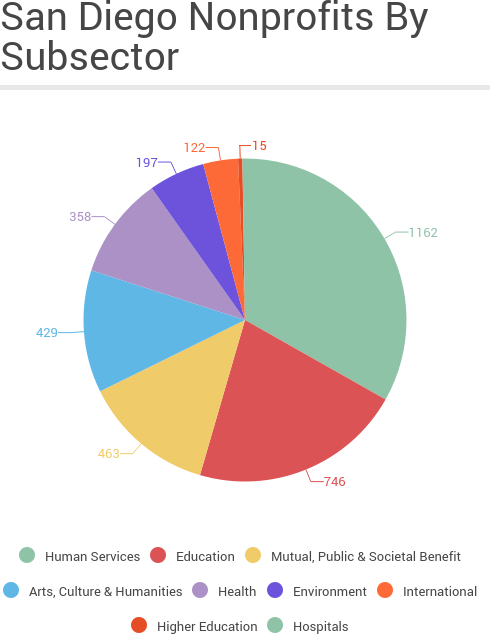 This is the percentage of San Diego nonprofit revenue that comes from contributions such as government grants, individual donations or foundations. That’s about 20 percent more than the state average.

San Diego nonprofits’ greater focus on outside dollars means they could be more vulnerable to the volatile nature of donations and grants.

It also likely means San Diego nonprofits have to spend more time applying for grants and seeking donations than those elsewhere, said Nancy Jamison, executive director at San Diego Grantmakers, which corrals foundations and other funders.